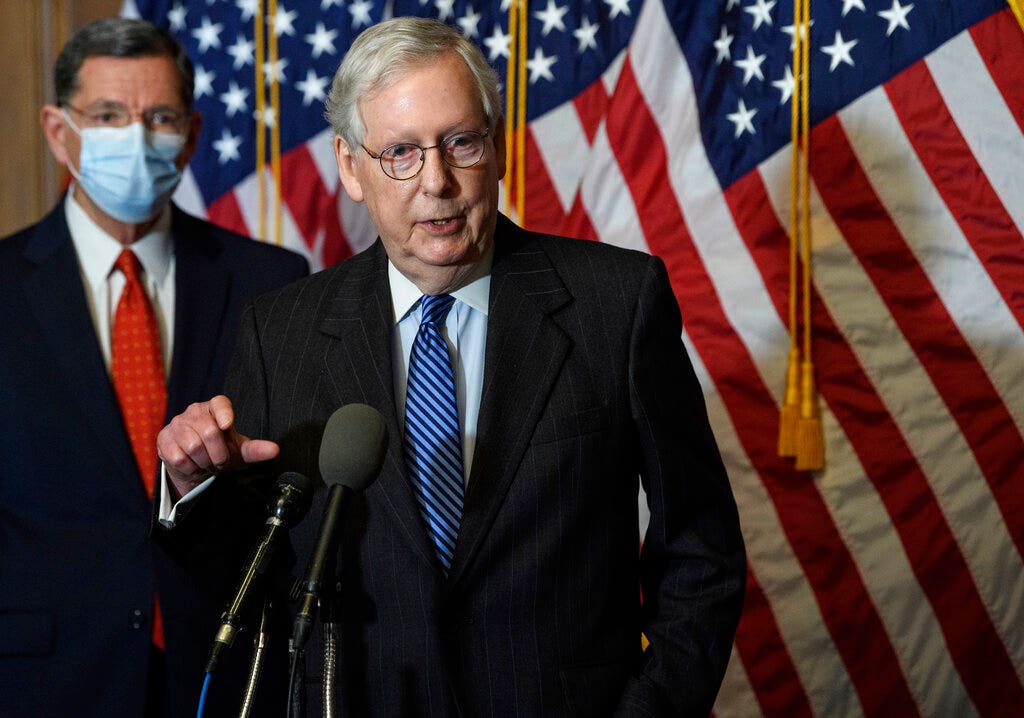 McConnell dismissed the $2,000 checks as a “universal cash giveaway” and not the right approach to provide targeted relief to those who need it most.

“A huge chunk would essentially be socialism for rich people,” McConnell said during a floor speech on New Year’s Day.

Sen. Bernie Sanders, I-Vt., balked at the notion that Republicans are now concerned about “socialism for rich people” when he said they were OK passing huge tax breaks for corporations. For added effect, he brought poster-sized checks to the Senate floor showing the millions in tax rebates companies like Amazon, Chevron and Delta Airlines received.

“I see, if I may say so, a bit of hypocrisy here,” Sanders added.

Sanders, with the support of Sen. Josh Hawley, R-Mo., attempted to bring a vote on $2,000 checks legislation on Friday. He also sought a vote on a McConnell-backed plan that pairs the $2,000 checks with measures on election security and curbing Big Tech — two other priorities of President Trump.

But Sen. John Cornyn, R-Texas, objected to the request for the votes, on behalf of an absent Sen. Pat Toomey, R-Penn., which effectively quashed the chances of $2,000 checks passing the Senate.

Time was running out for a vote since the current Congress ends on Sunday. Any pending legislation would die and have to be reintroduced in the new session.

Senate Democratic Leader Chuck Schumer, D-N.Y., spoke about the urgency of the matter in a floor speech Friday before Republicans rejected his separate request for a vote.

“If the Senate does not take action today, $2,000 checks will not become law before the end of Congress and they will know that Leader McConnell and the Republican majority have prevented them from getting the checks — plain and simple,” Schumer said. “This is the last chance.”

STIMULUS CHECKS ROUND 2: WHAT TO EXPECT

Sen. John Thune, R-S.D., objected to Schumer’s request for a vote on the $2,000 checks arguing that sending checks to families making six-figures and unaffected by the pandemic is “not fiscally responsible.”

“It is not targeted to help those who are most in need,” Thune said.

Congress already passed $600 checks as part of a broader $900 billion aid package. Those checks are currently being distributed. While Trump signed the bipartisan legislation, he also demanded bigger checks of $2,000. The House agreed by passing standalone legislation and sending it to the Senate, where it was blocked.

Hawley expressed frustration that a measure that would pass the Senate can’t even get a vote.

“This seems to be the Senate versus the United States of America,” Hawley said.