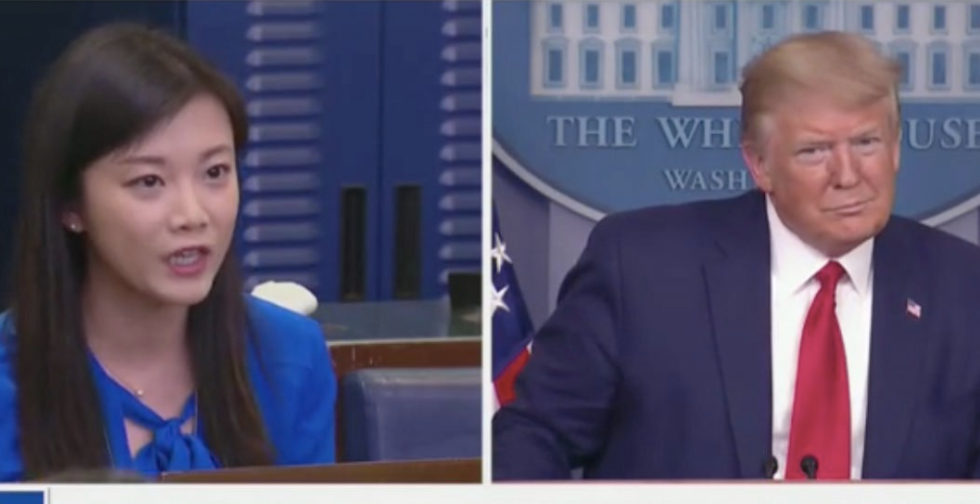 Get all the latest news on coronavirus and more delivered daily to your inbox. Sign up here.

Republicans are sounding the alarm after a reporter with ties to China’s propaganda machine gained access to Monday’s White House coronavirus press briefing and used the platform to promote Beijing’s efforts — even as right-leaning outlets, including One America News Network (OANN), were being denied seating privileges at the briefings.

The White House Correspondents’ Association (WHCA), an independent affiliation of journalists, nominally controls which reporters have access to the briefings, although the Trump administration has unilaterally invited OANN to the events after the WHCA revoked the network’s privileges.

“Only last week, there were multiple flights coming from China full of medical supplies,” the reporter from Hong Kong-based Phoenix TV began during Monday’s briefing. “Companies like Huawei and Alibaba have been donating to the United States, like 1.5 million N95 masks and also a lot of medical gloves, and much more medical supplies.”

“Sounds like a statement more than a question,” Trump interjected.

The reporter then asked if Trump was willing to work “directly” with China; Trump responded that China should honor its trade deals with the United States.

“Who owns that? China?” Trump asked.

“It’s based in Hong Kong. … It’s a privately owned company.”

But it turns out that Phoenix TV, which has aggressively sought to expand in the United States, has closer ties to the Chinese government than the reporter let on.

Within minutes of the exchange in the briefing room, consultant Elliot Schwartz flagged that in 2018, a former Phoenix TV news director testified as part of an FCC filing that the outlet is essentially controlled by China’s Communist Propaganda Department, and follows a directive to not report positively on the United States.

Specifically, the former director, Chung Pong, remarked: “I know from personal experience that Phoenix TV’s content is subject to the dictates of the leadership of the Central Communist Propaganda Department, Central Communist Overseas Propaganda Office, and the Ministry of Foreign Affairs which often directly sent instructions to Phoenix Satellite TV.”

Pong said he was fired in 2002 on orders of then-Chinese leader Jiang Zemin.

And, The Daily Caller‘s Chuck Ross found that the Hoover Institution has said it considers Phoenix TV a “quasi-official” broadcaster with “links to the PRC’s Ministry of State Security.”

Additionally, a 2017 report from Freedom House noted that Phoenix TV is “owned by a former military officer [Liu Changle] with close ties to Beijing officials” and produces coverage that is “typically favorable to the CCP.”

“Moreover, over the past two years, it has been used as an outlet for airing televised confessions by various detained CCP [Communist Party of China] critics, most notably all five Hong Kong booksellers abducted by Chinese security forces in late 2015,” the report continued. “Such coverage is perhaps not coincidental, considering that CCTV [China Central Television] reportedly holds a 10 percent stake in Phoenix.”

Within hours of the briefing, top Republicans demanded action, even as some left-wing journalists implied Trump had acted improperly in the exchange.

GINGRICH: MEDIA GAVE FEINSTEIN A PASS FOR HAVING A CHINESE SPY DRIVER FOR DECADES

“Phoenix TV has been waging information warfare in the US for yrs,” Sen. Ted Cruz, R-Texas, wrote on Twitter. “They are nominally private but actually state owned. In 2018 I led effort to block them from using cutouts to spread propaganda. MSM should NEVER have given them seat at WH press conference.”

Cruz continued: “Phoenix Satellite TV US is a subsidiary of Beijing Phoenix TV, based in Hong Kong. The People’s Republic of China (PRC) exerts control over Chinese media and the control extends to Phoenix: in 2009 testimony to the US Economic & Security Review Commission on China, Anne Marie-Brady…at Wilson Center said ‘Phoenix is nominally privately-owned; however its current main investor is the State-owned enterprise China Mobile.’ In 2016…Phoenix BROADCAST THE FORCED CONFESSIONS of 5 Hong Kong booksellers for violating PRC censorship law.”

After continuing to outline Phoenix TV’s ties to China in a lengthy thread, Cruz concluded: “So to recap, the WH Correspondents Assoc gave a seat at the WH press briefing to an employee of the Chinese Communist govt, to ask globally televised Qs to POTUS, at the same time China is waging a propaganda campaign to hide their culpability & coverup of the Wuhan virus?!?”

He then appended footage of Conan O’Brien saying, “What the hell is that?”

Cruz wasn’t alone in questioning the episode in no uncertain terms. “Why is an outlet with such close ties to Communist China allowed in the White House briefing room?” asked Rep. Paul Gosar, R-Arizona.

Conservatives also pointed out that the WHCA announced last Wednesday that it was removing the right-leaning OANN from its coronavirus briefing rotation after its reporter allegedly violated its policy on social distancing.

“A ‘reporter’ who essentially works for China can get in to press briefings to spread Chinese propaganda but the @whca  is trying to ban @OANN  from the briefings,” wrote producer Robby Starbuck. “Insane.”

“These are the ***same people*** that screamed until their voices cracked about Russian interference and Russian propaganda for years,” wrote Turning Point USA’s Benny Johnson. “Now they invite *literal* Communist Chinese propaganda mouthpieces into the WH to question POTUS & applaud it.”