Democratic House leaders are putting the finishing touches on a multitrillion-dollar coronavirus relief bill and are aiming for a vote on the massive legislation next week.

Authors of the ambitious pandemic response bill expect to have the text of the legislation available for review early next week. House leadership is eying a vote on the legislation on Thursday, May 14, Fox News has learned.

A Democratic aide told Fox News the plan is expected to be a “multitrillion-dollar” package that will rival or exceed the initial $2.2 trillion CARES Act that passed earlier this year with overwhelming bipartisan support. This piece of legislation will be the fifth round of coronavirus relief, and House leadership has dubbed it “CARES 2.”

It’s unclear if there will be bipartisan buy-in for this piece of legislation, however, as Republicans have been keen to pause any more relief efforts until all the nearly $3 trillion in previous aid is implemented. The historic pace of spending has also heightened concerns about the impact on the national debt, now over $25 trillion.

On Thursday, House Speaker Nancy Pelosi signaled Congress would come back “probably next week” and responded “We’ll see” when asked if Democrats would pass the legislation without White House and GOP support — which they had in the previous four rounds of coronavirus legislation.

The centerpiece of the legislation is expected to be funding for state and local governments that are struggling with tax revenue losses while dealing with mounting expenses for fighting the virus.

Pelosi has urged her members to “think big” on their proposals and has dubbed this relief effort as one needed to help the “heroes” on the front lines who are funded through public dollars, such as teachers, health care workers, postal workers and first responders.

The plan is also expected to have more direct payments to Americans, expanded small business aid, funding for the U.S. Postal Service, support for mail-in voting, more unemployment insurance money, and a boost to food assistance programs, like SNAP.

PELOSI SAYS DEMOCRATS ARE THINKING ‘BIG’ FOR NEXT ROUND OF CORONAVIRUS AID, DESPITE DEBT CONCERNS FROM GOP

Democrats are devising this legislation with their committee leaders, whereas with past bipartisan bills, Pelosi has negotiated directly with the Trump administration. 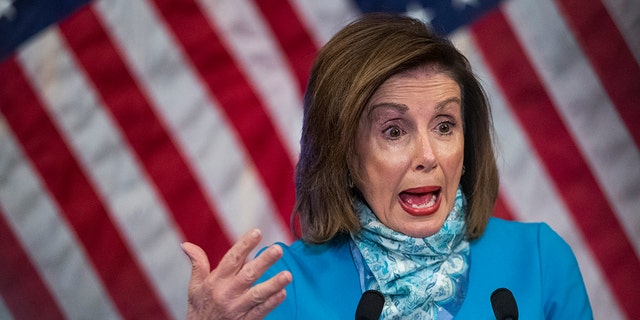 It’s possible Democrats could go it alone on this measure – even though House Majority Leader Steny Hoyer, D-Md., indicated he did not want to vote on a bill just to “send a message.”

While the Senate returned this week for work for the first regular session since the pandemic broke, the House has not on the advice of the Capitol’s physician.

The House is also expected to vote on a measure next week to allow proxy voting during the pandemic to avoid health risks.

Under a proxy vote system, absent members can essentially “call in” their votes to designees on the floor who would be bound to cast their ballot at the behest of the member.

Lawmakers are expected to receive a 72-hour notice on the vote so they’ll have time to make arrangements to safely travel back to Washington and return to their offices around the Capitol campus.

Meanwhile, President Trump and the GOP have been hounding Pelosi to call back the full House and their staffs.

“I believe Congress is essential,” GOP Leader Kevin McCarthy said Thursday. “And just like essential workers in our communities, it’s time that we get back to work.”