Ivanka Trump underscored the importance Friday of a “free and fair” election, and an accurate tally of ballots.

Her tweet follows a roller-coaster press briefing from the president on Thursday night, in which he told Americans his campaign would “not allow corruption to steal the election” and asserted that “if you count the legal votes” he would “easily win.”

“I challenge Joe and every Democrat to clarify that they only want legal votes — they say the word votes — we want legal votes to be counted,” Trump said, referencing his Democratic challenger Joe Biden. “Openness and transparency, no illegal votes cast after Election Day.”

Biden’s lead widened in some battleground states on Friday.

Earlier in the day, Biden said he, too, believed that “each ballot must be counted.”

Trump, a Republican, and his supporters have claimed that Democratic states are “trying to steal the election” and conceal their efforts by not allowing “legally permitted observers” to watch ballot counting.

“We were winning in all of the key locations by a lot, and miraculously, our numbers started getting whittled away in secret,” President Trump said.

His campaign has filed lawsuits in several states this week, seeking “meaningful” access for poll watching, including in Pennsylvania, which has since swung toward the former vice president.

For the last few months of the election, President Trump claimed the election would be “rigged” against him and railed against mail-in voting — arguing without evidence that it was ripe for fraud. 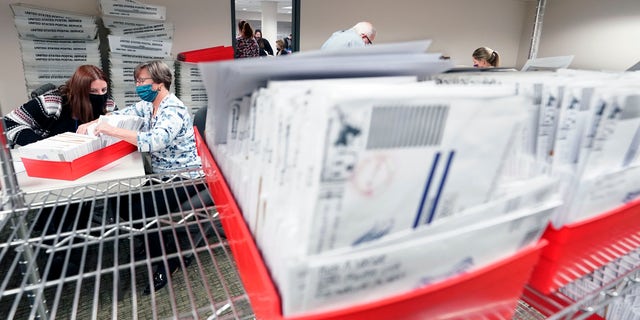 Election officials and polling experts have previously said there is little proof that mail-in voting is any more susceptible to fraud than voting in person.

Double the number of Americans voted by mail this year than in 2016 due to the threat of the coronavirus pandemic, which prompted shutdowns of a wide swath of the U.S. economy and advisories for many people to shelter in place at their homes.

Many of the mailed ballots were cast by Democrats, partly because Republicans acted on the president’s warnings of fraud and voted in person.

As a result, Republican-heavy ballots cast on Election Day indicated leads for the president that faded as mailed-in ballots — often counted last — were tallied.

Fox News projected that Biden has 264 of the 270 electoral college votes needed to clinch the presidency.

The Trump campaign, however, is working to gather evidence to back up the president’s claims of fraud. It has turned an entire room inside its Virginia headquarters into a designated call center to field contacts from a new voter fraud hotline.

“This election is not over,” campaign General Counsel Matt Morgan wrote in a statement on Friday as online media outlets including Business Insider and Vox News predicted a Biden victory.

“The false projection of Joe Biden as the winner is based on results in four states that are far from final,” Morgan argued. “Georgia is headed for a recount, where we are confident we will find ballots improperly harvested, and where President Trump will ultimately prevail.”

That state’s attorney general, Aaron Ford, dismissed voter fraud claims during a Friday interview on “CBS This Morning,” and The Nevada Independent editor, Jon Ralston, tweeted that a list of the “thousands of individuals” the campaign had sent to the Department of Justice is made up of “military folks who cast absentees.”

“Many on list sent to the DOJ have these postal codes: AE, AA and AP: Armed Forces Europe, Armed Forces Americas and Armed Forces Pacific. That is, Nevadans in the military who sent absentees,” wrote Ralston. “Incompetence or fraud, gentlemen? Why does Team Trump hate NV military personnel?”

A senior White House aide confirmed to Fox News that President Trump does not have plans to immediately concede the election.

Biden Rapid Response Director Andrew Bates, however, told Fox News in a statement that “the American people will decide this election.”

The U.S. government, he added, “is perfectly capable of escorting trespassers out of the White House.”