One of many stock buys by Sen. David Perdue during his time in the Senate has come under scrutiny from his opponent less than two months ahead of a Georgia runoff election for his seat which could decide control of the U.S. Senate.

Perdue’s financial disclosures indicate that he purchased stock in a defense contractor called BWX Technologies, which supplies the U.S. Navy as he was assuming a subcommittee chairmanship that oversees the U.S. fleet. The campaign for Perdue’s Democratic challenger Jon Ossoff has seized on the revelations about the timing of the stock purchases, accusing Perdue of “self-dealing.”

Perdue’s campaign has defended the senator, citing the fact Perdue does not manage his own portfolio day-to-day and calling the Ossoff campaign’s attacks “desperate.”

“This is a desperate attempt by left-wing blogs and Democratic operatives to revisit an issue that has been asked, answered, and settled. These attacks have been tried, and they failed because they are false,” Perdue campaign Communications Director John Burke said in a statement. “David Perdue doesn’t manage his trades or retirement funds — they are handled by outside financial advisors. Transactions take place without his input or approval — he is not involved.”

The Daily Beast first reported the story, which comes as both Perdue and his Democratic opponent Jon Ossoff are under close scrutiny in their critical Senate runoff election.

Ossoff’s financial disclosures, many outlets have previously reported, show that the media company Ossoff is a CEO of, which produces investigative documentaries, received payments from Al Jazeera and a Hong Kong media company which China holds an 18.4% stock in through the Chinese state-owned Assets Supervision & Administration Commission. Ossoff’s campaign has disavowed the Chinese Communist Party and the anti-Hong Kong Freedom stance of that media company and its CEO, and noted that his company’s documentaries are independently made and merely licensed by other media firms.

Perdue in early 2019 became the chairman of the Senate Armed Services Subcommittee on Seapower, which oversees the naval fleet. BWX Technologies manufactures, among other things, nuclear reactors which power multiple classes of American submarines and aircraft carriers.

Perdue bought the stocks in amounts between $1,001 and $15,000 and sold them in approximately the same increments.

From late 2018 and early 2019 when Perdue purchased the BWX technologies stock to mid-2019 when the stock was sold the price generally increased as Perdue pushed a “robust naval fleet.”

Perdue, according to the Center for Responsive Politics, had a net worth of more than $24 million as recently as 2018. Like many wealthy Americans, especially millionaires, Perdue owned a diversified portfolio that includes investments in many stocks. 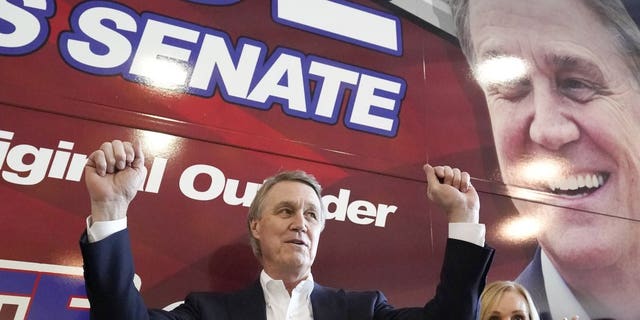 In this Nov. 2, 2020 photo, Sen. David Perdue and his wife Bonnie react during a campaign stop at Peachtree Dekalb Airport in Atlanta. Perdue earlier this year was cleared of wrongdoing by multiple investigations into different stock trades earlier this year. Perdue has stopped trading individudal stocks. (AP Photo/John Bazemore)

The New York Times reported that the total stock Perdue would have owned of BWX Technologies would have been between $38,000 and $305,000. Assuming Perdue’s net worth is still approximately $24 million, that works out to a very small fraction of the senator’s overall net worth.

Perdue’s campaign also notes that the senator doesn’t personally handle his individual stock trades, which instead are made by an independent financial adviser. Further, Perdue was cleared of any wrongdoing earlier this year by investigations from the SEC, Department of Justice and the Senate Ethics Committee in relation to other stock trades that came under scrutiny, the campaign says.

Perdue also restructured his finances this year so that he no longer trades individual stocks.

Nevertheless, Ossoff and his campaign have attacked Perdue over the stock buys, saying that it represents a conflict of interest.

“David Perdue’s corruption and self-dealing are flagrant. He is blatantly exploiting his office to line his own pockets. This conduct is utterly inexcusable,” Ossoff said in a statement.

Ossoff separately called on senators to be banned from trading individual stocks.

Perdue’s campaign slammed the attacks on the senator as “lies.”

“Baseless accusations have now been reviewed by the DOJ, the SEC, and the bipartisan Senate ethics committee — and all three independent entities cleared Senator Perdue of any wrongdoing. These recycled lies won’t change that fact, it’s time for Democrats to get a new playbook,” Burke said.

The Ossoff-Perdue race is one of two closely watched Georgia Senate runoffs, with the other featuring Sen. Kelly Loeffler, R-Ga., and Democratic challenger Raphael Warnock.

Control of the U.S. Senate is essentially on the ballot for Georgia voters in the runoffs, which will be held on Jan. 5. If Republicans manage to hold one of the seats they will secure a majority in the Senate for the next Congress and an amplified say in the Biden administration agenda once the president-elect is sworn in on Jan. 20.

If Democrats win both races, however, they will effectively bring the balance of power in the Senate to a draw in which Vice President-elect Kamala Harris can break ties in party-line votes.

“Everything is on the line in Georgia,” Casey Black, the senior spokeswoman for the Perdue campaign, said recently.

“Passing meaningful legislation to protect the American people is critical. And it’ll only happen with a Democratic Senate majority,” Ossoff said in a tweet this week. We’ve got to win.”