EXCLUSIVE: As Vice President Kamala Harris made her first trip to the border on Friday, the Republican National Committee (RNC) followed her to Texas with an on-the-ground ad campaign designed to highlight what it described as the “failed policies” and “open borders agenda” they say has fueled the border crisis.

“Make no mistake, the Biden-Harris administration’s failed policies and reckless open borders agenda is the true ‘root cause’ of the raging border crisis,” RNC Chairwoman Ronna McDaniel said in a statement. “After more than 90 days of lying to the American people and fueling the crisis at the border, Kamala’s layover in El Paso is too little, too late.”

VICE PRESIDENT HARRIS’ FIRST TRIP TO THE BORDER: WHAT YOU NEED TO KNOW 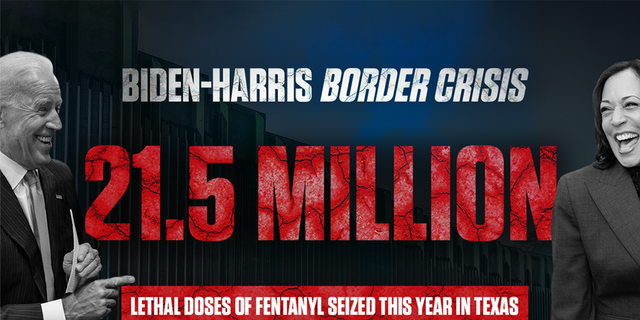 One of the ads being put out in Texas by the Republican National Committee. (RNC)

Harris visited El Paso, Texas, Fridayin her first trip to the border in the more than 90 days since she was appointed by President Biden to lead the diplomatic talks to solve what the administration has described as the “root causes” of the crisis that has seen a massive surge in migrant encounters.

But Republicans have tied the crisis directly to the Biden administration’s reversal of Trump-era policies, accusing the new administration of encouraging migrants to make the journey north. 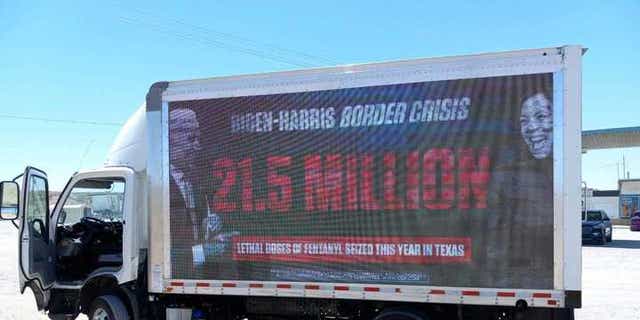 The RNC has followed Kamala Harris to the border with an ad campaign. (RNC)

As part of its on-the-ground effort, the RNC purchased a mobile billboard in El Paso that will highlight the increase in migrants, criminals and some drugs that has happened in recent months.

It shows statistics including a 3,166% increase of sex offender arrests in Del Rio Sector this fiscal year, 21.5 million doses of the deadly drug fentanyl seized in Texas, and the 21-year high in encounters of migrants at the border. 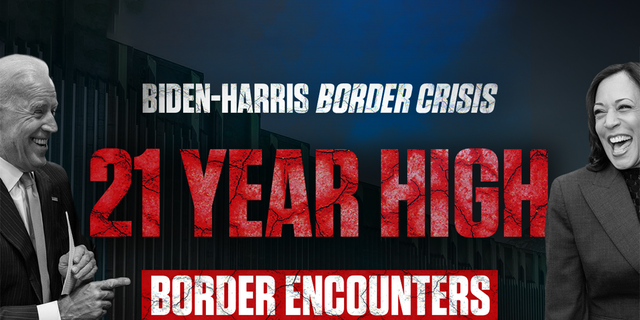 Another of the ads being put out by the RNC in Texas. (RNC)

The campaign also criticizes Harris’ decision to go to El Paso, which is generally not seen as a hot spot of illegal immigration, unlike others like the Rio Grande Valley sector – which has been hardest hit by the surge in migration.

The RNC has also taken out ad campaigns in local outlets to target Rep. Vicente Gonzalez, D-Texas, for his support of the Biden administration. The committee also said it was blanketing the airwaves with surrogates and allies on radio and  TV. 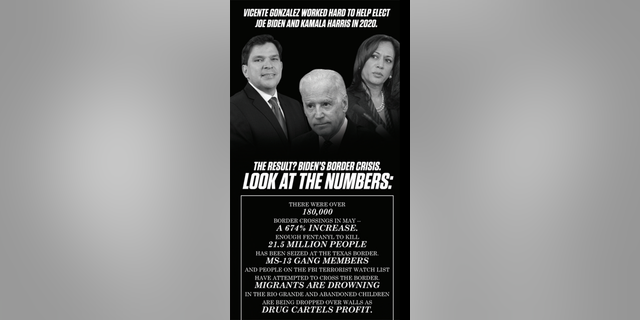 “Americans know that while Biden and Harris are refusing to take accountability for the crisis they created, Republican governors and local leaders are stepping up to protect their citizens,” McDaniel said.

Harris departed Joint Base Andrews early Friday and traveled with Homeland Security Secretary Alejandro Mayorkas, Senate Judiciary Committee Chairman Dick Durbin, and Democratic Rep. Veronica Escobar from Texas. She visited a processing facility and also met with child migrant who were being cared for at the facilities.

Harris, joined by Mayorkas, Durbin and Escobar, at the end of the trip, made remarks at the end of the trip and claimed that, despite the rising numbers of migrants coming to the border, the administration had made “extreme progress” and pointed to DHS Secretary Alejandro Mayorkas in particular.

“I commend all of them for their success they have seen thus far, I call it progress, we’re not exactly where we want to be yet, but we’ve seen extreme progress over these last few months because of his dedication and his efforts,” she says.