“Do you believe that any member of the military should be treated differently based on their skin color and sex? Again yes or no will do,” Cotton asked during the hearing. “No, I do not believe that and that is why we have diversity equity and inclusion focus in the military,” Austin responded.

The Arkansas senator and former Army infantry officer said he and Congressman Dan Crenshaw, R-Texas, a former Navy SEAL, had received “several hundred” messages from irate service members complaining the Pentagon’s ‘extremism and diversity’ training is dividing the forces and taking time away from critical training for war.

“One Marine told us that a military history training session was replaced with mandatory training on police brutality, White privilege and systemic racism,” Cotton said, adding that several officers from that Marine Corps unit “are now leaving” the military as a result of the training. 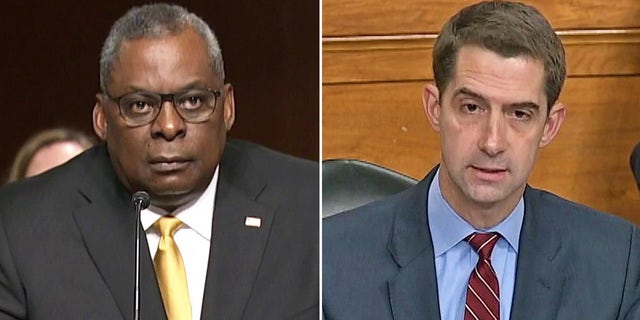 Some lawmakers said it’s not just the new training that is slowing down the military.

REPUBLICANS SCRAMBLE TO STAMP OUT ‘WOKE’ POLITICAL BIAS, CANCEL CULTURE IN THE US MILITARY

A staggering 71% of young people are ineligible to join the military, according to the Pentagon due to obesity, a lack of a high school diploma or having a criminal record. Sen. Tommy Tuberville, R-Ala., a former college football coach, said a $715 billion defense budget is worthless if you don’t have the right people on the team. He said if a draft was held today in America, only a fraction of people would qualify.

“Only 450,000 of 35 million are eligible to be in the military and that’s not enough,” Tuberville said during the hearing Thursday. “We can’t build a killing machine, which is what our military is. We got to be able to kill the enemy when they come at us.”

The defense secretary replied with a full-throated defense of the military.

Earlier this week, the Supreme Court declined to hear a case about women being eligible for the draft, even though all combat jobs are open to them.

Congressman Michael Waltz, R-Fla., the only Green Beret ever elected to Congress, recently wrote the superintendent of the U.S. Military Academy at West Point asking why critical race theory was being taught to future Army officers.

“We aren’t demanding oversight of ‘diversity training,’ Waltz said in a tweet in response to a New York Times article. “We are demanding that divisive seminars like ‘How to Deal with Your White Rage’ to our future military leaders not continue.”

“This isn’t about ‘cultural wars.’ This is about keeping our military merit-based & mission focused.”

“The only color that matters on the battlefield is the flag on your uniform because that’s all our enemies are concerned with,” Waltz added “Our military should be open to all Americans and only worried about standards needed to win wars.”

TUCKER CARLSON: THE MILITARY GOES WOKE, AND THE CONSEQUENCES COULD BE DISASTROUS

Asked recently about the chorus of GOP lawmakers demanding the military stay away from what it calls ‘woke’ training and the recent stand-down to address diversity and extremism, Pentagon press secretary John Kirby said, “If you meet the standards and you’re qualified to be in the military and you’re willing to raise your hand and serve this country, we want you to be able to do that and we want you to be able to do it free of hate and fear and discrimination.”

Defense Secretary Austin spoke earlier this month at a Pentagon event marking Pride month. “I know my LGBTQ+ teammates are proud this month. I’m proud too. I’m proud every month and every day to call you my teammates and to serve alongside you. Because your lives and your service are living proof that we are stronger and more effective together.”

During the heated exchange on Capitol Hill Thursday, Cotton warned, “We’re hearing reports of plummeting morale, growing mistrust between the races and sexes where none existed just six months ago, and unexpected retirements and separations, based on these trainings alone.”

The Pentagon’s diversity and extremism training was sparked by the presence of military veterans, including some active-duty service members among the rioters who stormed the U.S. Capitol on Jan. 6.

During his confirmation hearing before becoming defense secretary, Lloyd Austin, a former four-star U.S. Army general, spoke about encountering skin-heads in the ranks while he was posted to Fort Bragg.

The Army’s largest base in the United States was named after Confederate Gen. Braxton Bragg who was defeated by Gen. Ulysses S. Gant at the battle of Chattanooga.

The Pentagon is reviewing the list of U.S. military bases named after former Confederate generals and plans to make recommendations to change them.