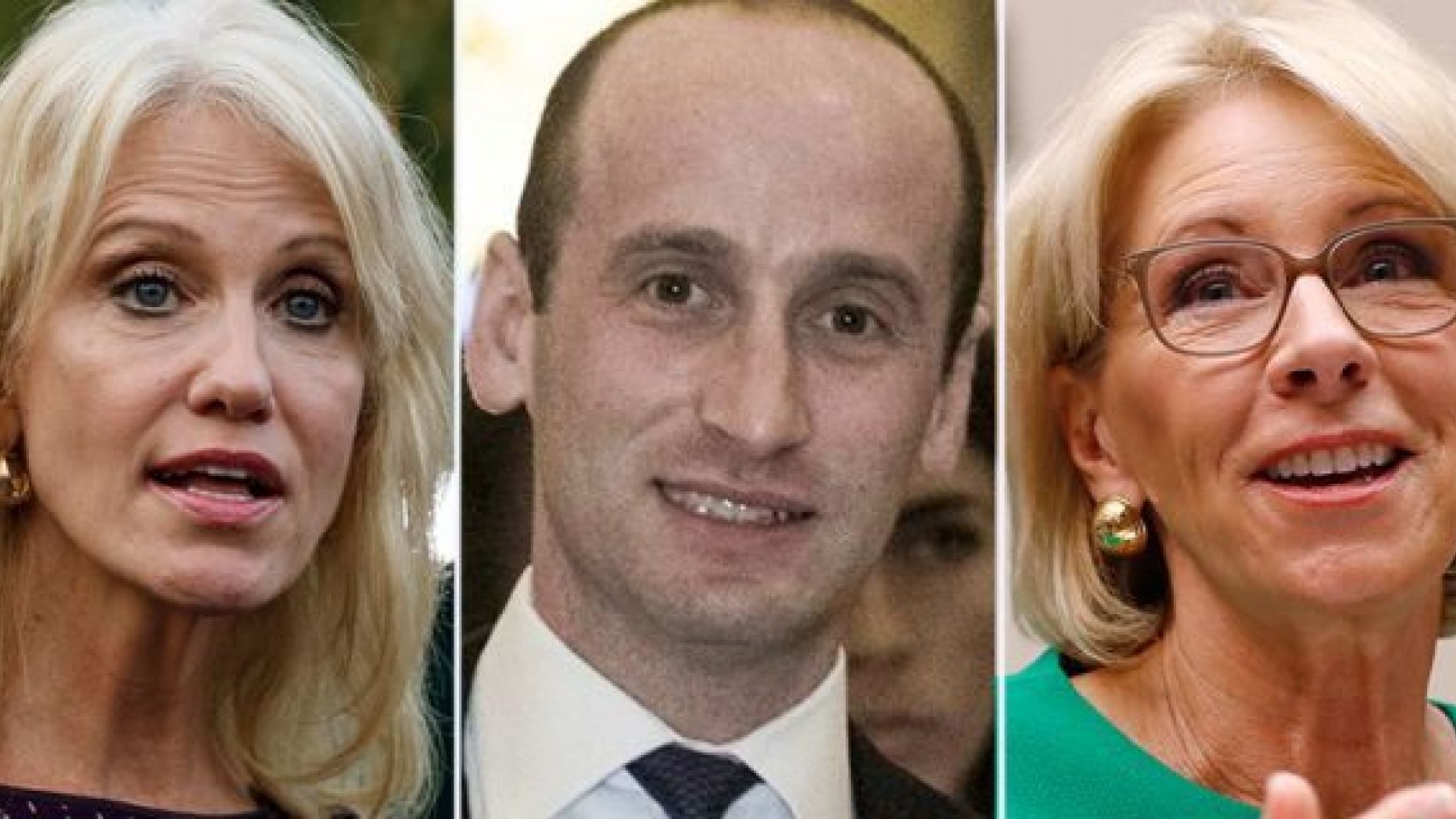 People like Kellyanne Conway, Stephen Miller and Betsy DeVos joined President Trump’s team at the beginning. They’ve occasionally — or in some cases, repeatedly — found themselves embroiled in controversies. But unlike the many other ex-Trump officials who’ve resigned, or been fired or pushed out, these stalwarts haven’t gone anywhere.

They don’t have the job security afforded to figures like Vice President Mike Pence, who was elected with Trump and whose role is enshrined in the Constitution, or senior advisers Ivanka Trump and Jared Kushner, who are family. They’ve weathered tough news cycles, been hounded in restaurants and other public places by liberal activists, and yet — most importantly — have largely stayed in the president’s good graces.

Here’s a look at those who are still hanging on.

Kellyanne Conway, a longtime Republican operative, became Trump’s campaign manager in August 2016 amid a campaign shakeup just months before the general election. And she’s been with Trump since, joining the White House as a counselor to the president when he took office. She has been assigned a wide portfolio of duties – serving as a frequent on-air surrogate while also leading the White House’s anti-opioids effort.

But there have been some hiccups too: A government watchdog this year determined that she violated the Hatch Act, the federal law that limits political activities of federal employees, through her television appearances and tweets. And then there’s the issue of her husband, George Conway, who has embraced his role as a vocal Trump critic – creating awkwardness as her boss has publicly slammed her husband as “a total whack job”. Still, she’s shown no sign of leaving any time soon.

Perhaps no White House aide is reviled by liberal activists quite as much as Stephen Miller, the architect of Trump’s immigration policies. Miller, a former aide to then-Sen. Jeff Sessions, is a true believer – he joined Trump’s campaign during the 2016 primary, later becoming a senior White House aide. Miller has also endeared himself to his boss through occasional combative media appearances.

Democratic activists have targeted Miller due to his involvement in highly charged issues, including the efforts early in the administration to restrict travel to the United States from places including Muslim-majority countries, as well as the administration’s once-enforced policy of separating illegal immigrant parents from their children when detained at the border. Miller has been protested while trying to eat at D.C.-area restaurants, but he has shown no desire to depart the White House as long as Trump is president.

Ben Carson – the retired neurosurgeon and a 2016 Republican primary opponent to Trump – was tapped to join the Trump Cabinet as secretary of Housing and Urban Development in 2017. As head of HUD, Carson has worked to roll back Obama-era rules, like one that mandated that single-sex homeless shelters funded by his department admit residents based on their stated gender identity instead of their sex at birth.

But he’s also weathered mini-scandals, like the time The New York Times in 2018 reported that the department planned to purchase $31,561 on dining room furniture, forcing HUD to cancel the purchase. (The agency’s inspector general later cleared Carson of any misconduct.) During a humorous moment earlier this year, Democrats tore into Carson after a Democratic lawmaker during a congressional hearing asked him, “Do you know what an REO is?” Carson responded, “OREO?” The lawmaker shot back that she was talking about real estate owned properties, not cookies.

He’s indicated he’d like to stay at HUD through Trump’s first term.

Betsy DeVos – the billionaire school choice advocate – was narrowly confirmed in 2017 as Trump’s secretary of education amid protests from Democrats. Pence was forced to break a tie in the Senate to confirm her – the first time in history that happened for a Cabinet member. She’s rolled back a number of Obama-era policies, including guidelines for investigating allegations of sexual assault on campus, replacing them with guidelines she said would help schools “treat all students fairly.”

She has been a top target for liberal protesters and was granted a federal Marshals detail after her confirmation battle. The department has said DeVos has received repeated threats “which necessitate the security detail in the first place.” During one tense moment in 2017, protesters blocked DeVos from entering a Washington, D.C., school, shouting “shame, shame” at the secretary as she was led back into her vehicle. But despite all this, DeVos is still at the department.

Wilbur Ross – a billionaire investor – was confirmed as secretary of commerce in 2017 at the age of 79, which made him the oldest first-time Cabinet secretary in history. He’s played an influential role in the United States’ trade war with China, recommending the Trump administration implement tariff increases on aluminum and steel imports.

Perhaps most controversially, Ross’ department was involved in the highly charged effort to add a citizenship question to the 2020 census. After protests and lawsuits, the Supreme Court this year blocked the question from the 2020 census. But the Democratic-controlled House voted earlier this year to hold Ross, along with Attorney General Bill Barr, in contempt of Congress for defying congressional subpoenas over the efforts to add the controversial question.

Treasury Secretary Steven Mnuchin – an investment banker who also produced movies like “Entourage” before getting involved in government — joined the Trump administration in 2017 after raising money for Trump during the campaign. He played a leading role in pushing forward the GOP tax cuts in 2017, and in placing various sanctions on Iran, China and Syria.

He’s weathered some scandals, including over the cost of the secretary’s travel aboard U.S. military aircraft. And his wife, actress Louise Linton, has repeatedly been at the center of controversy, including the time she and her husband posed for an infamous photo flashing an uncut sheet of single dollars for the camera.

Mike Pompeo was a Republican congressman from Kansas before he was tapped by Trump to serve as CIA director in 2017 — a role where he personally briefed the president every day. He later replaced Trump’s first secretary of state, Rex Tillerson, as the nation’s top diplomat after Trump repeatedly clashed with Tillerson.

Pompeo has become a trusted confidant of Trump’s and has largely avoided the personal scandals of other survivors, partly by being able to stay out of the fray of daily domestic politics. But recently, he has been a target of Democrats over what he knew about Trump’s dealings with Ukraine throughout the impeachment proceedings. While he’s been with Trump since the beginning of his term, Pompeo is facing pressure from top Republicans to leave the administration to run for the Senate in Kansas next year.