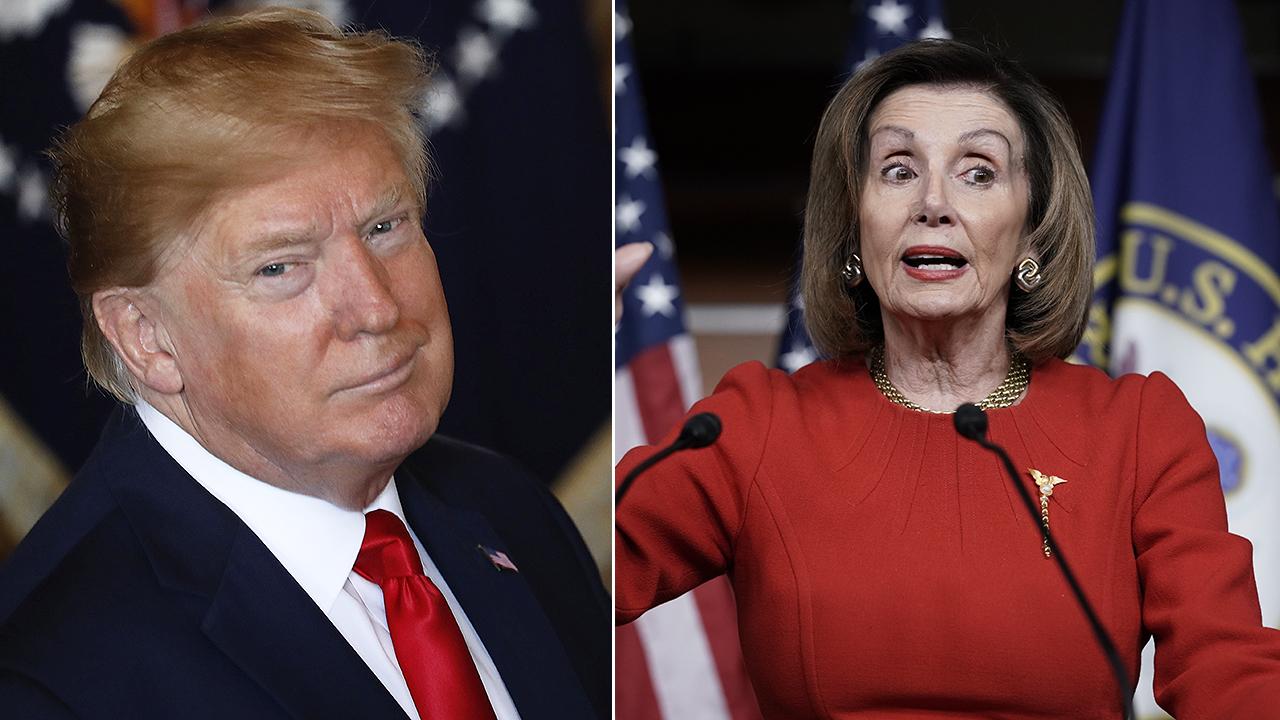 If there was any Christmas truce between President Trump and House Speaker Nancy Pelosi, it didn’t last long.

The president went so far Thursday morning as to suggest Pelosi should face a primary challenge, as he called her San Francisco district “filthy” and “dirty” and said she should focus on cleaning it up.

“A primary for N?” he wondered.

This, after the president tore into House Democrats overnight and into the morning over their handling of the impeachment process, calling them “hypocrites” and “liars” for allegedly seeking concessions in the Senate that Republicans were not afforded in the House — and for hitting pause on impeachment after stressing the national security urgency of it all.

REPORTER’S NOTEBOOK: WHY IS PELOSI HOLDING THE ARTICLES OF IMPEACHMENT? DC INSIDERS HAVE SOME THEORIES

“The Radical Left, Do Nothing Democrats said they wanted to RUSH everything through to the Senate because ‘President Trump is a threat to National Security’ (they are vicious, will say anything!), but now they don’t want to go fast anymore, they want to go very slowly. Liars!” Trump tweeted Thursday morning.

House Judiciary Committee Chairman Jerrold Nadler, D-N.Y., in his committee’s impeachment report, stated the president “will remain a threat to national security and the Constitution” if he remains in office.

Democrats generally used that argument to bolster their case for a swift impeachment process. Nadler made a similar declaration in an ABC interview earlier this month, claiming that Trump’s dealings with Ukraine are evidence of an ongoing security risk.

“He is openly seeking interference in the 2020 election and he poses a continuing threat to our national security and to the integrity of our elections to our democratic system itself,” Nadler said. “We cannot permit that to continue.”

Despite this assessment, the impeachment process has stalled after Pelosi abruptly opted not to deliver articles of impeachment to the Senate, after the House adopted two articles alleging abuse of power and obstruction of Congress for Trump’s actions in Ukraine.

Pelosi says she will not appoint impeachment managers who will represent the House during a Senate trial until the Senate determines the trial’s process. Senate Majority Leader Mitch McConnell, R-Ky., has publicly rejected a demand from Senate Minority Leader Chuck Schumer, D-N.Y., to subpoena additional documents and witnesses, claiming these fact-finding efforts were the House’s job. McConnell has also claimed that he cannot do anything until Pelosi sends over the impeachment articles, leaving the two chambers at an “impasse.”

REPUBLICANS FUME OVER DEM THREAT OF NEW IMPEACHMENT ARTICLES: ‘TIME TO CUT THEM OFF’

The witnesses Democrats seek had previously ignored requests to testify before the House, as the White House asserted privilege and instructed them not to comply. Rather than turn to the courts to enforce subpoenas, House Democrats declared that they would use this as evidence of obstruction.

Sen. Lisa Murkowski, R-Alaska, a potential swing vote who has declared impartiality in the matter, called out House Democrats for not following protocol.

“If the House truly believes that they had information that was going to be important, they subpoena them, and if they ignore the subpoena — as they did, at the direction of the White House — then that next step is to go to the courts,” Murkowski explained in an interview with local KTUU, while also criticizing McConnell for saying he’d coordinate with the White House.

Wednesday night, Trump blasted Democrats for making the demands for witnesses, after House Judiciary Republicans were denied the opportunity to hold a hearing prior to an impeachment vote.

“Why should Crazy Nancy Pelosi, just because she has a slight majority in the House, be allowed to Impeach the President of the United States?” Trump tweeted, adding, “Now Pelosi is demanding everything the Republicans weren’t allowed to have in the House.”

Meanwhile, Trump teed off on Pelosi over the issues of homelessness and crime in her home district, something he hit California Gov. Gavin Newsom for overnight as he threatened federal intervention.

“Nancy Pelosi’s District in California has rapidly become one of the worst anywhere in the U.S. when it come to the homeless & crime. It has gotten so bad, so fast – she has lost total control and, along with her equally incompetent governor, Gavin Newsom, it is a very sad sight!” Trump wrote.

“Trump has spent 2019 attacking our institutions and fellow Americans. Locking kids in cages. Sucking up to the NRA. Trying to take your healthcare away. Giving tax cuts to the wealthy. And denying climate change,” he wrote. “So we’re leaving him in the dust.”