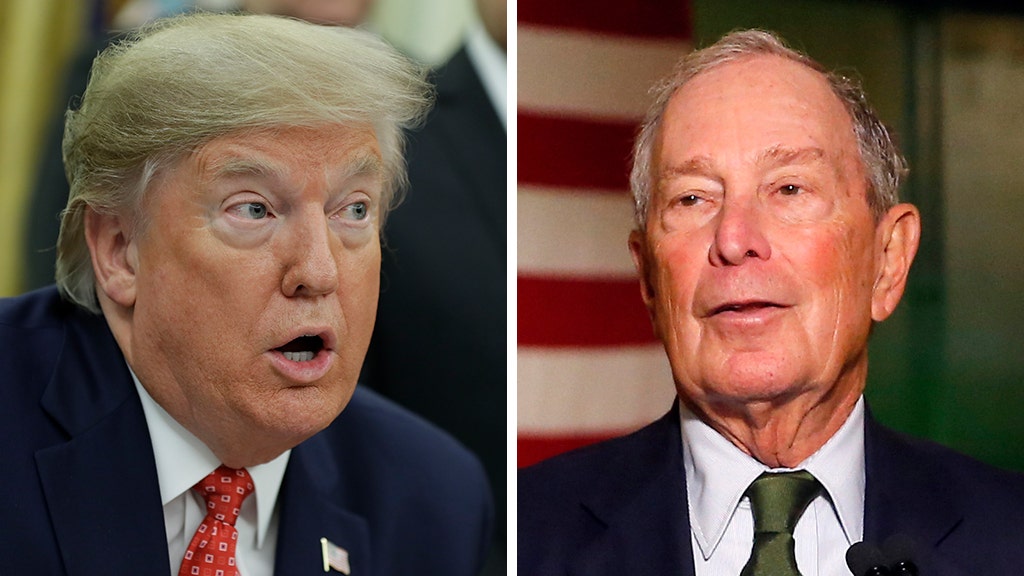 The war of words between President Trump and fellow New York billionaire Michael Bloomberg reached a new level of nastiness on Thursday as the two traded deeply personal insults on Twitter.

“Mini Mike is a 5’4” mass of dead energy who does not want to be on the debate stage with these professional politicians,” Trump tweeted Thursday morning. “No boxes please. He hates Crazy Bernie and will, with enough money, possibly stop him. Bernie’s people will go nuts!”

Trump also compared Bloomberg’s 2020 bid to former GOP rival Jeb Bush’s once-highly touted presidential campaign: “Mini Mike Bloomberg is a LOSER who has money but can’t debate and has zero presence, you will see. He reminds me of a tiny version of Jeb ‘Low Energy’ Bush, but Jeb has more political skill and has treated the Black community much better than Mini!”

The post included a doctored photo of Bloomberg looking short. The president’s claim that Bloomberg is five feet and four inches is an exaggeration. According to reports, Bloomberg stands at about five feet, eight inches. Trump is six feet, three inches.

The former New York City mayor spoke minutes earlier at an event in Winston-Salem, N.C., assuring the audience he “knows how to deal with New York bullies.”

“So I’m not afraid of Donald Trump and that’s why he keeps tweeting about me,” Bloomberg said. “The ways you can tell he’s worried is if he mentions you. He’s a narcissist and he understands name is everything and if you really want to annoy him say ‘that person,’ don’t say Donald Trump.”

BLOOMBERG’S CONTROVERSIAL COMMENTS ON STOP AND FRISK, CHINA AND MORE

“We know many of the same people in NY. Behind your back they laugh at you & call you a carnival barking clown,” Bloomberg tweeted. “They know you inherited a fortune & squandered it with stupid deals and incompetence. I have the record & the resources to defeat you. And I will.”

The social media scuffle offered a preview of sorts of what a general election battle might look like should Bloomberg be able to leverage his enormous wealth and political profile to pull out a Democratic nomination win in the crowded presidential field.

The president has been making fun of the former New York City mayor’s height for weeks, trying to make the “Mini Mike” nickname stick.

During Trump’s pre-Super Bowl interview with Fox News’ Sean Hannity earlier this month, he made the claim that Bloomberg wanted a “box for the debates to stand on.”

“There’s nothing wrong. You can be short,” Trump said. “Why should he get a box to stand on. He wants a box for the debates. Why should he be entitled? Does that mean everyone else gets a box?

The Bloomberg campaign issued a statement after the interview denying Trump’s claim.

“The president is lying,” a Bloomberg spokesman told NBC News. “He is a pathological liar who lies about everything: his fake hair, his obesity, and his spray-on tan.”

Bloomberg entered the race extremely late – announcing his presidential bid in November – and is skipping the Iowa caucuses, New Hampshire primary, Nevada caucuses and South Carolina primary — the four early voting states that kick off the nominating calendar. Instead, Bloomberg is concentrating on the delegate-rich Super Tuesday states that vote on March 3, and beyond.

Bloomberg’s standing in a new Quinnipiac University poll released this week gives him his second of the four national polls needed to qualify for the Democratic debate in Nevada on Feb. 19 ahead of the Nevada caucuses later this month. Bloomberg needs two more national polls, with a ranking above 10 percent before Feb. 18, in order to qualify for the debate.