WASHINGTON (AP) — The U.S. House marched on Wednesday toward historic nighttime votes to impeach President Donald Trump, split as severely as the nation over the conduct of the 45th American president but all but certain to approve the charges against him and send them to the Senate for trial.

Trump, accused of abusing his presidential power when he asked Ukraine to investigate his political rival ahead of the 2020 election and then obstructing Congress’ investigation, would be just the third American president to be impeached, leaving a lasting stain on his tenure at the White House.

Ahead of the vote, Speaker Nancy Pelosi invoked the the Pledge of Allegiance and the Preamble to the Constitution in arguing that the Founders’ vision for a republic was threatened by Trump’s actions.

“Today we are here to defend democracy for the people,″ she said to applause from Democrats in the House chamber.

Trump, tweeting from the White House, used all capital letters and exclamation points to register his outrage: “SUCH ATROCIOUS LIES BY THE RADICAL LEFT, DO NOTHING DEMOCRATS. THIS IS AN ASSAULT ON AMERICA, AND AN ASSAULT ON THE REPUBLICAN PARTY!!!!” 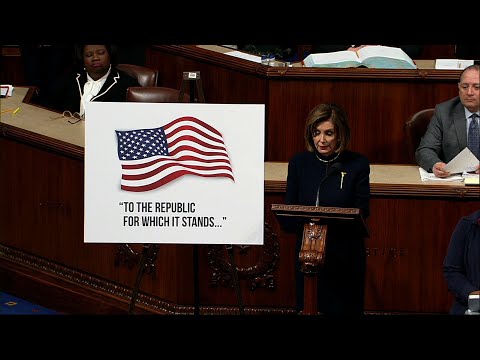 The impeachment effort, unfolding over weeks and then a long final day of debate, has divided the lawmakers in Congress much the way Americans have different views of Trump’s unusual presidency and the articles of impeachment against him. Yet the outcome was not in doubt.

According to a tally compiled by The Associated Press, a clear House majority of Democrats was ready to vote to impeach. No Republicans were expected to join them as the GOP stands by its president.

Next comes a January trial in the Senate, where a vote of two-thirds would be necessary for conviction. While Democrats have the majority in the House to impeach Trump, Republicans control the Senate, and few if any are expected to diverge from plans to acquit the president of the charges in the new year ahead of early state primary voting.

As the House debated ground rules for the final debate, Rep. Jim McGovern, D-Mass., chairman of the Rules Committee, said, “This is a democracy-defining moment.” He said, “This is about protecting our democracy.”

Republicans rose to the president’s defense.

Rep. Doug Collins of Georgia warned that the Founders were just as concerned about a purely partisan impeachment, as this one was on track to become, wielded by the power of a majority party.

“This is not a solemn occasion,” he mocked the Democrats’ statements. “You’ve been wanting to to do this ever since the gentleman was elected.″

Trump, who was heading for a campaign rally in the election battleground state of Michigan, has implored Americans to “read the transcript,” but the facts of his July phone call with the Ukraine president that sparked the impeachment inquiry have been largely confirmed by the White House memo of the conversation and witnesses in impeachment hearings.

Trump asked Volodymyr Zelenskiy to investigate Democrats and his 2020 political rival Joe Biden. At the time, the newly elected Ukraine leader was hoping for a coveted White House visit to showcase his standing with the U.S., his country’s most important ally. He was also counting on nearly $400 million in military aid as his country confronted its hostile neighbor, Russia.

The House impeachment resolution says that Trump abused the power of his office and then tried to obstruct the investigation in Congress like “no president” in history.

The president “betrayed the nation by abusing his high office to enlist a foreign power in corrupting democratic elections,” it said. “President Trump, by such conduct, has demonstrated that he will remain a threat to national security and the Constitution if allowed to remain in office.”

The question for lawmakers was whether those were impeachable offenses.

Democrats drew from history, the Founders and their own experiences, some as minorities and immigrants, seeking to honor their oath of office to uphold the Constitution. “In America,” said Rep. Hakeem Jeffries, D-N.Y., “no one is above the law.”

Republicans aired Trump-style grievances about what Rep. Debbie Lesko called a “rigged” process and what Alabama Rep. Clay Higgins said was an attempt to undo the will of voters to remove Trump. Some Republicans said Democrats have been trying to impeach Trump ever since the special counsel investigation into Russian interference in the 2016 election.

Presidents Andrew Johnson in the 1860s and Bill Clinton in the 1990s were impeached by the House but acquitted by the Senate. Richard Nixon in the 1970s resigned rather than face the House vote over Watergate in the first first televised impeachment hearings, which captured the attention of the nation. The proceedings against Trump, while highly controversial, have not captivated the nation to that extent as impeachment becomes less rare.

Democrats say they cannot wait for the next election for the nation to decide whether Trump should remain in office because he has shown a pattern of misconduct, particularly toward Russia, that indicates he will try to corrupt U.S. elections in 2020.

“This is not about making history, this is about holding a lawless president accountable,” said Rep. David Cicilline, D-R.I.

Few lawmakers are crossing party lines, and those who do face consequences. One freshman Democrat, Jeff Van Drew of New Jersey, has indicated he will switch parties to become a Republican after opposing impeachment. Earlier this year, Michigan conservative Rep. Justin Amash left the GOP when he favored impeachment.

Centrist Democratic lawmakers, including many first-term freshmen who built the House majority and could risk their reelection in districts where the president is popular, announced they would vote to impeach.

As soon as Wednesday’s session opened, Republicans tried to halt the process. All of their efforts — to adjourn, to condemn, to delay — were soundly turned away through the day.

Minority Leader Kevin McCarthy, R-Calif.,, suggested that Republicans çould try to undo the vote someday. “Maybe a future Congress would even expunge this vote,” he told Fox News, deriding the months-long impeachment proceedings as the quickest in history.

One Democrat, Joe Kennedy III of Massachusetts, read a letter to his young children explaining his vote to impeach. “This is a moment you will read about in your history books,” he told them.