Vice President-elect Kamala Harris said Thursday that last week’s assault on the U.S. Capitol reminded her of the 2017 “Unite the Right” rally in Charlottesville, Va.

In an interview on NPR, the former Democratic California senator said photographs of rioters carrying the Confederate flag and wearing “Camp Auschwitz” hoodies reminded her of images taken during the white nationalist demonstrations that eventually turned deadly. 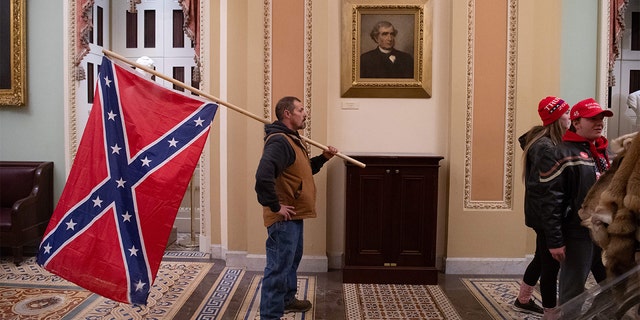 “Sadly, it is not the first time I have seen a demonstration like what you are describing in the history of our country,” Harris said. “And it is — it is a reminder that we still have a lot of work to do.”

Washington, D.C., U.S. Attorney Michael Sherwin told reporters on Friday that investigators had opened 98 criminal cases and will have more than 300 subject files open by the end of the day.

In addition, the FBI — which has issued multiple calls for help with identifying suspects — has received more than 100,000 tips, according to FBI Washington Field Office head Steven D’Antuono.

In a tweet on Thursday, D’Antuono’s office announced the arrest of Delaware resident Kevin Seefried — identified as the individual shown carrying the Confederate flag through the Capitol.

“It was horrific,” Harris continued.

“It was a day that wherein we witnessed an assault on America’s democracy, a day when we witnessed the terror that a few can wreak on so many,” she noted. “And it was probably, you know, it will be in history recorded as one of the worst days in terms of an attack on the integrity of our democracy.”

“I think that we cannot yield to those who would try and make us afraid of who we are,” Harris concluded. “We are, for all of our faults and imperfections, we are a nation that was founded on very important principles and guided by extremely important ideals. And we cannot abandon that.”